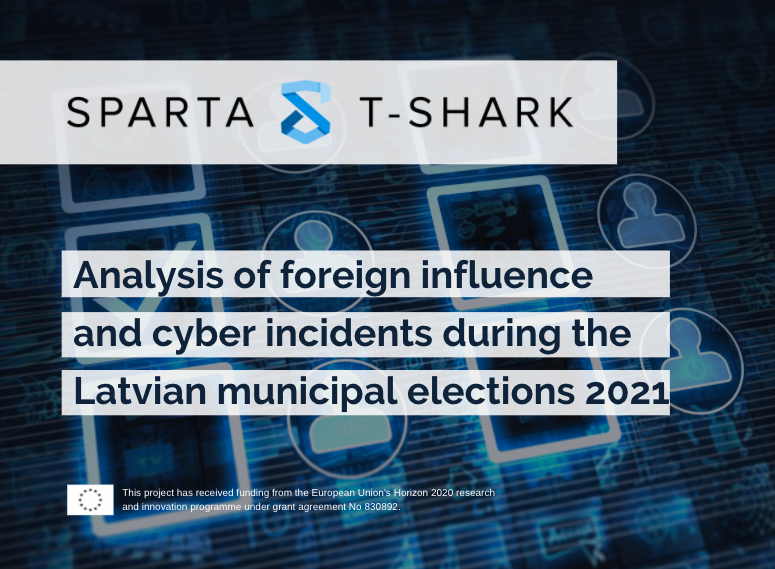 Disclamer: This analysis was conducted by one of Sub-case owners (DeBunkEU.org) that recently joined the SPARTA T-SHARK Program. The aim of the “Analysis of foreign influence and cyber incidents during the Latvian municipal elections 2021” was to demonstrate how the incidents collected from the different data sources (Information and cyber environment) can be linked and analysed together and how the decision makers can benefit from the full spectrum of cybersecurity awareness.

In the beginning of June, regular municipal elections were held in Latvia. Even though the municipality of Riga did not hold the elections this year, the capital was targeted the most amid the decision of the mayor to remove the Belarusian flag during the hockey tournament.

To complete this analysis, DebunkEU.org joined the T-SHARK programme, which concentrates on combining information and technological spheres to draw connections between cyber incidents and the information landscape. Analysis of Latvian municipal elections Information environment was the first attempt to understand how Information and cyber environments can be linked and analysed together.

From 13th May to 8th June 2021, DebunkEU.org analysed 564 articles related to the 2021 Latvian municipal elections. As a result, 45 articles (7,8%) were identified as disinformation related to the municipal election, and the rest of the publications, 519 (92.2%), were neutral in their coverage. False and misleading information was most often published in Russian (57.8%). The leading distributors of problematic information covering the elections were baltnews.com (8.9%), controlled by the Russian government’s media holding Rossiya Segodnya, headed by the EU-sanctioned propagandist Dmitry Kiselyov, and cont.ws (8.9%), a Russian language platform which was used in a large-scale malign Information operation, possibly associated with the Russian intelligence, as discovered in 2019.

Elections in the Riga municipality did not occur this year because the City Council was elected during the extraordinary elections last year. Therefore, the council of the capital continues to work until the elections of 2025. However, Riga was discussed the most – throughout the monitored period, the coverage amounted to 11 articles. This was due to the decision of the mayor of the city and other Latvia’s officials to remove the Belarusian flag during the IIHF World Championship 2021 and replace it with the opposition flag instead. Accordingly, the most discussed politicians during the pre-election period were the mayor of Riga, a member of the “Development/For!” party Martins Stakis, and the Minister of Foreign Affairs of Latvia from the “New Unity” party Edgar Rinkevich. In his rhetoric, Aleksandr Lukashenko strived to blacken Latvia’s authorities for taking off the Belarusian flag in Riga, portraying this as intentional political manipulation before the municipal elections. 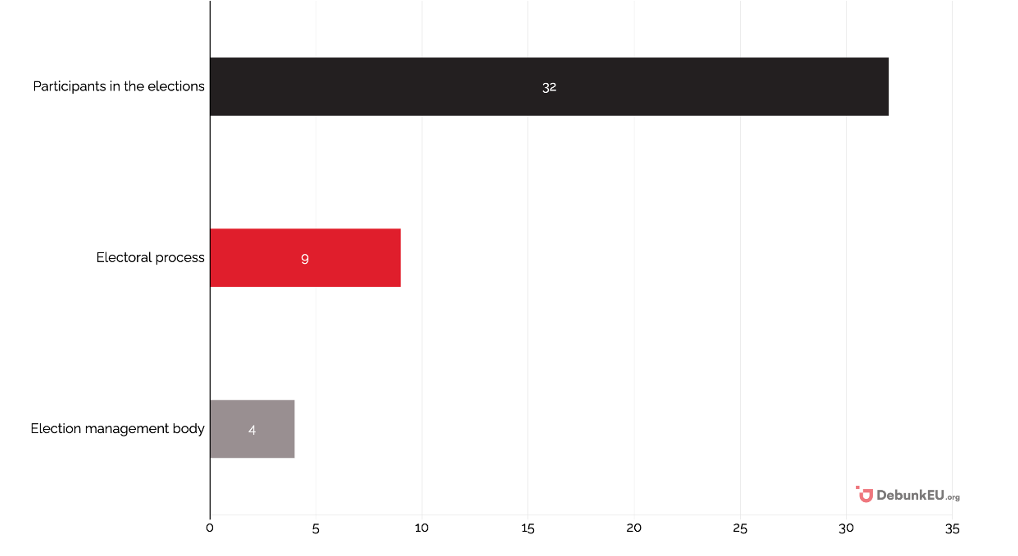 Analysis of potentially harmful Facebook posts presented a relatively low number of articles discussing the municipal elections misleadingly – twelve such pieces were found in 7 public groups. Most articles targeted Tukums and Valmiera municipalities. These posts included videos of Ruslan Strakis, a person who was actively involved in political activities back in 2011, claiming that the municipal elections are falsified and controlled by Latvia’s oligarchs. However, none of the credible media channels reported on this case. 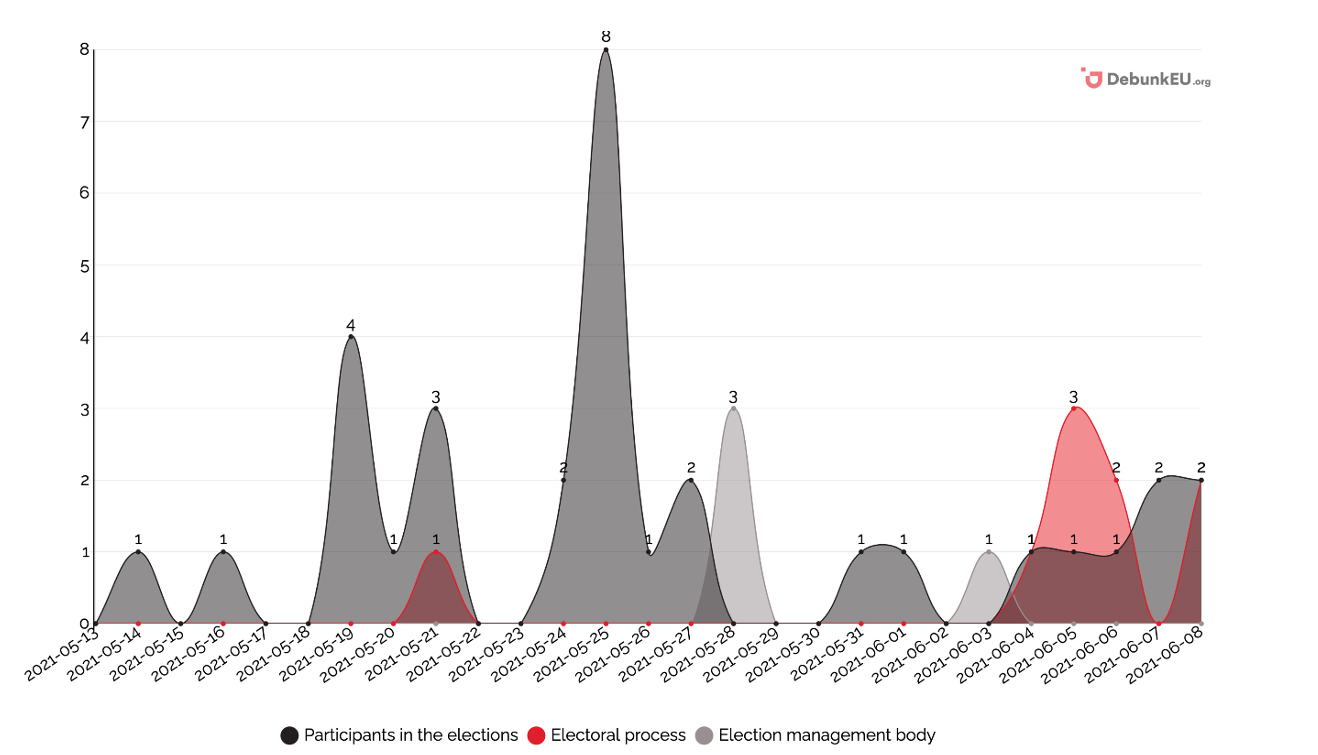 False and misleading information in digital media and social media tended to focus more on elections as a political process, seeking to discredit and diminish the reputation of political parties and candidates (71.1% of all publications). Nevertheless, the activity of disinformation sources was relatively low. It suggests that the pro-Kremlin media and other harmful disinformation actors have a modest interest in Latvia’s regional political events. Throughout the last decades, parties that are favourable to Russian-speaking audiences gained influence only in a couple of municipalities. Thus, the Russian-speaking part of the Latvian population is a small-scale audience. Moreover, the local nature of the municipal elections might have a rather unexciting character for audiences abroad. Seemingly, the pro-Kremlin media is more interested in covering the events provoking greater resonance in various audiences simultaneously.

Like other democracies, Latvia has been a target to infrequent interferences within its cyberspace. However, there were no cases of external intervention before and after the 2021 municipal elections. None of monitored credible local media sources elaborated on this matter, and Latvia’s Security Service reported no direct or systematic attempts of external actors to influence the municipal elections. Firstly, it suggests that Latvia has made a great effort to strengthen its cybersecurity under the guidelines “Latvia’s cybersecurity strategy 2019-2022”. Secondly, the municipal elections in Latvia have never been a crucial target for external actors to target. Therefore, the elections held this year present no deviation from the previous elections in terms of cyber incidents.

Within the framework of the T-SHARK programme, aspects of potential relations between the information and digital enironments will be analysed in more detail. Firstly, this methodology would allow to follow a more structured approach when analysing amplification of cyberattacks through the communication channels. Secondly, monitoring topics which are being escalated in the media would help to identify potential cyber incidents, used as elements of complex attacks. Such methodologies, designed in T-SHARK, will allow to present information about previously mentioned issues in a structured way, could also contribute towards developing new, complex capabilities of managing cyber security.

DebunkEU.org is an independent technology think tank and non-governmental organisation that researches disinformation and runs educational media literacy campaigns. Our team conducts 100+ analyses into disinformation concerning COVID-19, NATO, elections, situation in Belarus, etc. DebunkEU.org operates in Lithuania, Latvia, Estonia, and Poland, and works on projects in the United States and North Macedonia with its partners.